The Hadacol Bouncers formed in the summer of 2013 for a Portland, Maine Swing Dance festival and have never looked back.  They have continued their close association with the dance crowd and are always looking to play for dancers. 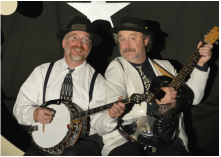 The group is a joint effort by co-band leaders Tom Whitehead (piano) and Peter Dunphy (banjo). Tom has a multi-style background in blues, New Orleans R&B and bebop piano. Peter has been playing New Orleans and Chicago-style jazz since he was fourteen. For the Hadacol Bouncers, Tom and Peter handpicked some of their favorite musicians from the Portland and Portsmouth jazz scene. Like any band of this size, there are several players who rotate in and out, but the following are the established core. ​

Tom Whitehead – Piano, Vocals & Guitar
A multi-faceted musician, Tom has been playing jazz and blues piano and guitar since the mid 80’s. Tom is also an active music educator and historian, and has a Masters in music education, with an emphasis in Jazz education. A lover of the music of Duke Ellington and Billy Strayhorn, Tom was co-founder of the Fogcutters Big Band of Portland. Tom is also a huge fan and practitioner of the style of New Orleans piano put forth by players such as Professor Longhair, Dr. John, James Booker and Henry Butler, and he loves to merge this style with that of the earlier stride and music of the 1920’s. 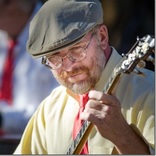 Peter Dunphy – Tenor Banjo, Tenor guitar & Vocals
Peter has played banjo and guitar since the age of fourteen.  He also studied classical guitar at the University of Southern Maine. A natural entertainer, vocalist and banjo virtuoso, Peter was impressed at a young age by the music of Louis Armstrong in his Hot Five and Hot Seven recordings. He also has a special love of the music of Fats Waller, James P. Johnson and Duke Ellington and enjoys finding and performing rare and sometimes humorous tunes by these and other artists. He is also a highly skilled finish carpenter and furniture maker. ​